In 1860, a number of farming and ranching families moved to Rocky Creek, three miles east of the site of present Hye. Rocky, as this area of settlement came to be called, continued to grow steadily throughout the 1860s and 1870s with the influx of both German and Anglo settlers. In 1880 Hiram G. (Hye) Brown, for whom the community was later named, built a small store and house at the location of present Hye. 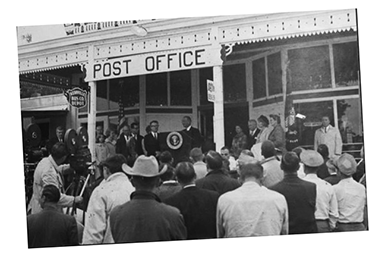 In 1886, he established a post office at Hye, which he operated as part of his general store. After the post office came in, other businesses were begun in the area, including a gristmill and a blacksmith shop. In 1906 a cotton gin was erected at Hye, and it continued to operate until 1945.

In 1904 Brown built a new structure to house the post office and his business on the south side of the road just opposite its old location. This building, the Hye General Store and Post Office, which in 1966 was entered in the state archives as a Recorded Texas Historical Landmark, still stands today and continues to serve its original function. 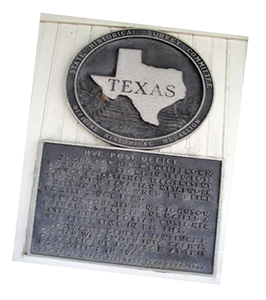 Hye gained particular attention in 1965 when President Lyndon Johnson used the front porch of the post office as the setting for his appointment of Lawrence F. O’Brien as United States Postmaster General. Johnson, whose boyhood home is nearby, also claimed to have mailed his first letter at the age of four from the Hye post office.

In 2011, local residents and business owners rallied to save the historical post office from closure. With new businesses calling Hye home and 290 bringing more and more visitors than the year before, the future of Hye should prove to be as rich as its past.